We developed our technology specifically to enhance art with a timeless and mythic sense of eternal lighting. 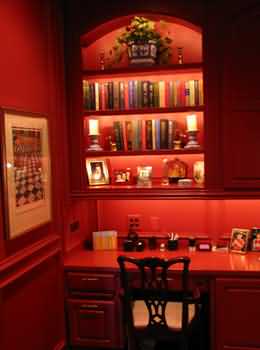 Answers.com defines a Phantom as “Something apparently seen, heard, or sensed, but having no physical reality; a ghost or an apparition.” We chose the word Phantom to illustrate the function and essence of our patented technology with an archetypal symbol whose universal appeal speaks to all ages and intrigues even the most analytical and skeptical of minds. Phantoms almost never appear as tangible forms to the viewer, but their activities and tangible presence is the stuff of both legend and documentary. On film they often appear as brilliant flashes of light that emanate from another dimension. Phantom projectors and strip lights produce light around artwork and within displays in much the same manner, making them the ghosts of the lighting machine that create magical effects and spatial fields of eminent light that appear sourceless and timeless.

In almost every mythology, a Phantom remains invisible, and if it is seen at all, it appears as a luminous aura that surrounds a place of significance. Legends often equate visitations to sacred locations or areas within an old mansion or castle where significant events occurred. Man has always placed special significance on certain places and events, and man has always recorded that significance either has history, myth, or some form of art. We developed our LED technology specifically to enhance art with a timeless and mythic sense of eternal lighting. We created fixtures that the eye cannot see and special photometric lenses that hide the beams of light radiating from bulbs and lamps. Just like the ghosts of legend and popular documentary, it is almost impossible to see a Phantom Projector or Strip Light, but you always see and feel the effects of its presence.

When you look at a painting illuminated by a Phantom Projector, you actually see a field of light surrounding both the picture and the frame. This effect is known as “lighting from within,” and it adds a third dimension to any two dimensional artwork that creates a living presence around the canvas, oils, and ornately carved wooden frame. Private collectors of art and commercial art galleries alike concur that this is the best way to light a painting, as it eliminates the physical obtrusion of traditional picture lights and does away as well with a visible beam of light produced by standard projectors. The eternal nature of art is also best revealed in the preserving light of Phantom. Our technology filters all infrared and ultraviolet light from the beam prior to it touching the canvas. With a color-rendering index equivalent to natural light, but exponentially safer to use with delicate and antique paints and surfaces, Phantom brings the past into the present and extends it without harm or degradation into annals of continued, future fame. Phantom is much more than just a lighting manufacturer. We are lighting scientists.

Understanding the unique properties of light is what enabled us to develop our breakthrough patents in display and showcase lighting technology. Light is the only phenomenon in the Universe that fills a space without consuming space. By applying this absolute law of physics with a less-is-more approach to fixture design, Phantom developed a wireless strip light that conducts either low voltage or standard voltage signals safely and invisibly through metal shelf standards using LED lamps. The lighting strip hugs the surface so well it actually blends into its surroundings invisibly. Small, tiny lamps along the strip radiate light into the enclosed space, filling every cubic centimeter with a balanced luminosity that enshrouds and accents books, jewels, porcelain, ornate carvings, and photography; and adds beauty to the function and form of fine cabinetry and vaulted ceiling coves.

Mystique defines the essence of Phantom, bringing eclecticism, advanced technology, mystery, and sophistication into a synthesis of light that makes art become alive and life itself a work of art now made visible in a whole new light. Click here to read informative articles that contain a world of information on how to apply this revolution in both physics and aesthetics, and click here to learn more about the lighting technology itself.